What Is the Harpenden Skinfold Caliper?

The Harpenden Caliper in recent years has been re-developed and improved in several key areas, the latest model now features an improved measurement range and are capable of measuring up to 80mm with a wider jaw opening to allow 80mm measurement to be facilitated. Older models which are available from other vendors continue to sell the old stock with just a 50 mm measurement range.

The Harpenden skin fold caliper is engineered to extremely precise standards and calibrated to traceable standards. Recent enhancements to the caliper include an increased jaw opening to facilitate measurement up to 80mm, which makes them suitable for both the measurement of skin folds and the girth measurement of small joints such the condyle processes at the ankle, wrist, knee and elbow i.e. a small anthropometer.

Manufactured for over half a century the Harpenden Skinfold Caliper is now recognised as the industry standard for body fat measurement.

The originally design had a painted steel frame and was very much on a par with other calipers that were on the market at the time. The decision was made though to take the caliper from its position in the market to be the number one market leader and to make it the caliper that people recognise as the industry standard.

This work involved taking the caliper frame from a paint finished steel framed caliper to a highly polished chromed caliper that would be acceptable not only to the fitness industry but to the medical world where the caliper would be used in very clean environments. The work involved in this process requires that each arm of the caliper after being produced on the press tool is then machined very carefully to minimise any marking of the frame.

On the old style frames these marks would have been hidden by the paint finish, but would be clearly seen with a chrome finish.  After the frame arms have been machined and prior to the chrome process, the arms are linished and polished to remove all machining marks and to produce a clear blemish free item that is then chromed.

The next process involves the calipers being carefully assembled, taking meticulous care to detail so as not to mark the chrome of the caliper. From assembly the calipers are then calibrated and each caliper is given its unique number for full traceability which meets with ISO accreditation for the Medical Devises Directive 93/42/EEC Class1, which results in the caliper being the only caliper with CE approval.

The final operation prior to the caliper being placed in its polished wooden case is a final inspection and cleaning of the polished chrome frame.

It is through this process of care and attention to detail that the Harpenden Skinfold Caliper is now recognised as the industry standard and is used all over the world from the medical industry to the fitness industry. The caliper is supplied to many national and international teams and their coaches for many different sports and social activities, as well as being used by many different medical units.

RANGE 80.00mm RESOLUTION 0.20mm REPEATABILITY 0.20mm ACCURACY 99.00%
NOTE Resolution is defined as the minimum graduation of the instrument and is not the same as the expected accuracy.

The Harpenden Skinfold Caliper is CE marked in compliance with the Medical Devices Directive 93/42/EEC for a Class 1 Device with Measuring Function and is Calibrated up to 80.00mm range using masters traceable to national standards.

If you would like to use traditional skinfold measurement sites but also collect muscle thickness data then check out BodyMetrix ultrasound. 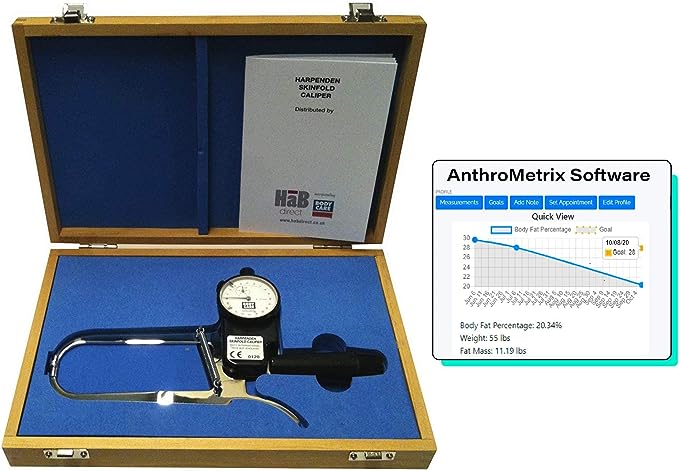 Harpenden Skinfold Caliper With Software
£521.21
Buy Now
We earn a commission if you make a purchase, at no additional cost to you.
Shopping Cart
Scroll to Top